Vestas Wind Systems A/S is the global leader in wind technology, the only global energy company solely dedicated to renewable wind energy, and continually innovating to lower the cost of energy for its customers. This includes offering modularized configurations of wind turbines that can be adapted to meet the unique requirements and environmental conditions of a new wind turbine’s site. Control of wind turbines should maximize power extraction from the wind while minimizing structural loads. Appropriately tuned control systems are crucial in this.

Vestas was able to implement their novel, unified controller formulation, eliminating the switching between different modes by using FORCESPRO from embotech. Using this model-based design approach significantly limits the number of tuning parameters considered by engineers, and exposes in an intuitive manner the trade-offs between power output and structural loads that are inherent to any turbine design.

Traditionally, the wind turbine production controller would consist of several control loops, interlinked through logic. The loops have to be individually tuned while influencing each other. This means, preparing a wind turbine for a particular site requires extensive tuning, simulations, and testing by experienced engineers that have a feeling for the complex interactions between different control loops.

Vestas decided to put their domain-specific knowledge to use by explicit application of holistic models of the wind turbine that combine the aerodynamic characteristics of the rotor with the mechanical characteristics of the structure. With this model describing the system behavior the different objectives in wind turbine control together with their corresponding constraints could easily be formulated. Additionally, the number of tuning parameters was significantly reduced to a handful of numbers that represent the fundamental, product-level trade-offs between generated power, material fatigue, noise, and rate of change in the actuators.

Armed with the system model and a novel formulation covering the physical constraints and objectives for the entire range of operation, Vestas proceeded to implement a model predictive control (MPC) framework. FORCESPRO from embotech was chosen as the software tool to implement the necessary solvers for the MPC optimization problems. The solvers code-generated with FORCESPRO automatically come with a Simulink® interface which drastically simplifies integration into an existing Simulink® block diagram for simulation. Because the solvers are automatically tailored to the particular problem instance and exploit the structure available in the MPC problem they are orders of magnitude faster than state-of-the-art general purpose optimization software and can meet the demanding timing requirements of a wind turbine control system. After evaluating solver performance and tuning the small number of control parameters, changing to prototyping hardware is as easy as changing a single line of code in the FORCESPRO code-generation script and downloading the generated solver to the control hardware.

Optimal control algorithms generated with FORCESPRO expose all necessary parameters for efficient tuning and are orders of magnitude faster than standard optimizers. 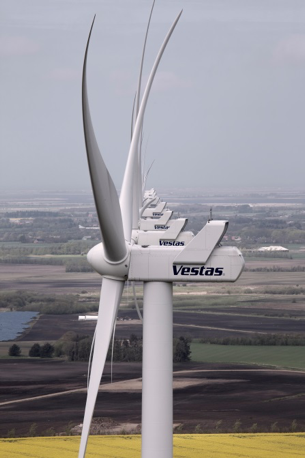 Optimization-based MPC controllers generated with FORCESPRO were embedded in Vestas’ wind turbine control software and deployed to turbines in the field. As of November 2016 they have been operating flawlessly for a year, corresponding to over 200 million solver calls (and counting) with only two solver calls not resulting in an optimal solution. Both of these failures occurred during experimental, excessive parameters which are not representative of a typical production turbine. The chance to win the 6/49 lottery are over five times better than a FORCESPRO solver not returning an optimal result.

The reduced number of tuning parameters, their intuitive physical interpretation, and the efficient simulation capabilities of FORCESPRO enable rapid control system design for a new wind turbine. Additionally, the MPC controller delivers noticeably better performance: data collected from two wind turbines – one equipped with the traditional control system and one with the new MPC controllers – show that the optimization-based controllers can reduce the mechanical loads, significantly reducing the cost of the supporting structure, e.g. by reducing the amount of steel in the tower. At the same time, power output is not compromised: the optimization approach ensured that at least the same amount of energy is extracted from the wind. This in turn means economic benefits for the customers of Vestas because of optimized, model-based design.

More information on MPC for wind turbine control can be found in the following publication:

You can also download a Download a pdf version of this success story or send us an e-mail.